On my final morning I called at the Capuchin monks’ mausoleum in the church of Santa Maria della Concezione on the busy Piazza Barberini. This I cannot recommend highly enough. In the sixteenth century some monk had the inspired idea of taking the bones of his fellow monks when they died and using them to decorate the palace. Is that rich enough for you? Half a dozen gloomy chambers along one side of the church were filled with such attractions such as an altar made of rib cages, shrines meticulously concocted from skulls and leg bones, ceilings trimmed with forearms, wall rosettes fashioned from vertebrae, chandeliers made from the bones of hand and feet. In the odd corner there stood a complete skeleton of a Capuchin monk dressed like the Grim Reaper in his hooded robe, and ranged along the other wall were signs in six languages with such cheery sentiments as WE WERE LIKE YOU. YOU WILL BE LIKE US, and a long poem engagingly called ‘My Mother Killed Me!!’. These guys must have been a barrel of laughs to be around. You can imagine every time you got the flu some guy coming along with a tape measure and a thoughtful expression.

Four thousand monks contributed to the display between 1528 and 1870 when the practice was stopped for being just too tacky for words. No one knows quite why or by whom the designs were made, but the inescapable impression you are left with is that the Capuchins once harboured in their midst a half-mad monk with time on his hands and a certain passion for tidiness.

Bill Bryson, Neither Here Nor There: Travels in Europe

Ever since I read Five Go To Demon’s Rocks many years ago, I’ve had a fascination for lighthouses. Enid Blyton tends to have that effect on me – I’m also similarly determined to picnic on a conveniently located deserted island, go camping in a caravan, be overfed by a kindly farmer’s wife, find treasure buried under a seemingly innocuous  field, live with a bunch of charming and eccentric circus folk and climb a tree whose top gets stuck in magical faraway lands. I realise some of these dreams are more practical than others.

When we visited Mamallapuram during our December vacation, I had no idea that I had a lighthouse to look forward to. The moment I spotted it, however, I knew I had to make at least one of my Famous Five fantasies come true.

When I finally made my way inside and up to the top, a jolt of nostalgia shot through my veins. I could just imagine Julian, Dick, George, Anne and Timmy lurking in every corner.

I’m not eight anymore (Julian doesn’t seem frightfully grown-up either) but I still sat down and devoured Five Goes to Demon’s Rocks over the weekend.

“I know where we could go – and we’d jolly well have some fun, too!” he said.

“Oh – and where is this wonderful place?” asked George disbelievingly.

“Well – I was thinking of my lighthouse,” said Tinker most surprisingly. And then, as no one said anything, but merely stared at him in astonishment, he nodded at them. “I said my lighthouse – don’t you know what a lighthouse is?”

“But, Tinker dear – you can’t possibly own a lighthouse,” said Aunt Fanny, smiling.

“Well, I do,” said Tinker quite fiercely. “You see, my father had some very special work to do, that couldn’t be done on land – so he bought an old empty lighthouse, and did his work there. I went to stay with him – my, it was grand there, with the wind the waves crashing about all the time.”

“Well, I’m blessed!” said Julian. “Here’s old George owning an island given to her by her mother – and Tinker owning a lighthouse given to him by his father! I wish my parents would present me with a volcano, or something really thrilling!”

“We’ll soon be off again together, all the Five – and two more to keep us company,” said Julian. “It will be quite an adventure!”

“An adventure?” said Tinker, surprised. “But you can’t have adventures in a lighthouse – it’s out on the rocks, all by itself, as lonely as can be! There aren’t any adventures to be found there!”

Ah – you wait and see, Tinker! You don’t know the Five! If there’s any adventure about, they’re bound to be right in the middle of it!

“And I would have gotten away with it, too, if it weren’t for you meddling kids!”

It was very exciting making plans to go to the lighthouse. Tinker told them all about it, time and time again. “It’s very tall, and there’s an iron stairway – a spiral one – going from the bottom up to the top. And at the top is a little room for the lamp that used to flash to warn ships away. 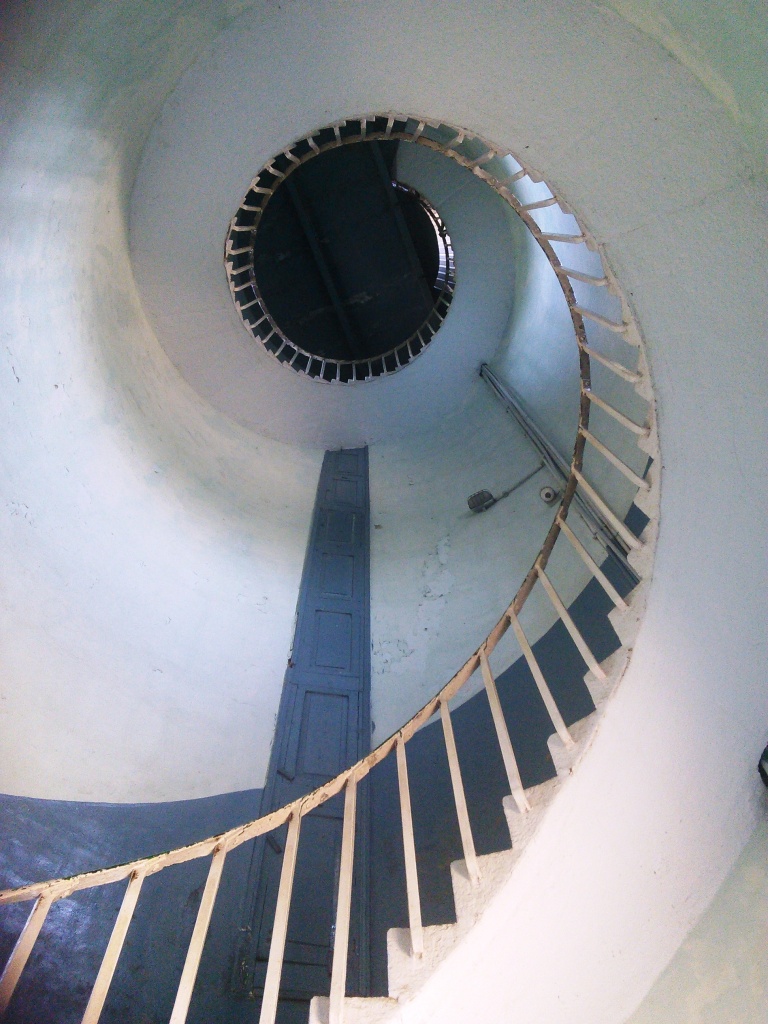 “Oh look – is that the lighthouse?”

“Yes. That’s it,” said the driver. “You get a good view of it now, from the hill. Fine one isn’t it, for an old one? Ah, they could build well in those days. That one’s made of stone.

Anne gazed at it. It was sturdily built and seemed very tall to her. Its base was firmly embedded in the rocks below it. Dick thought that the foundation must go very deep down into the rocks, to hold the lighthouse firmly in the great gales that must blow in bad weather. A gallery, rather like a verandah, ran round the top, just below the windows through which the lighthouse lamp once shone. What a view there would be from that gallery, thought Anne. 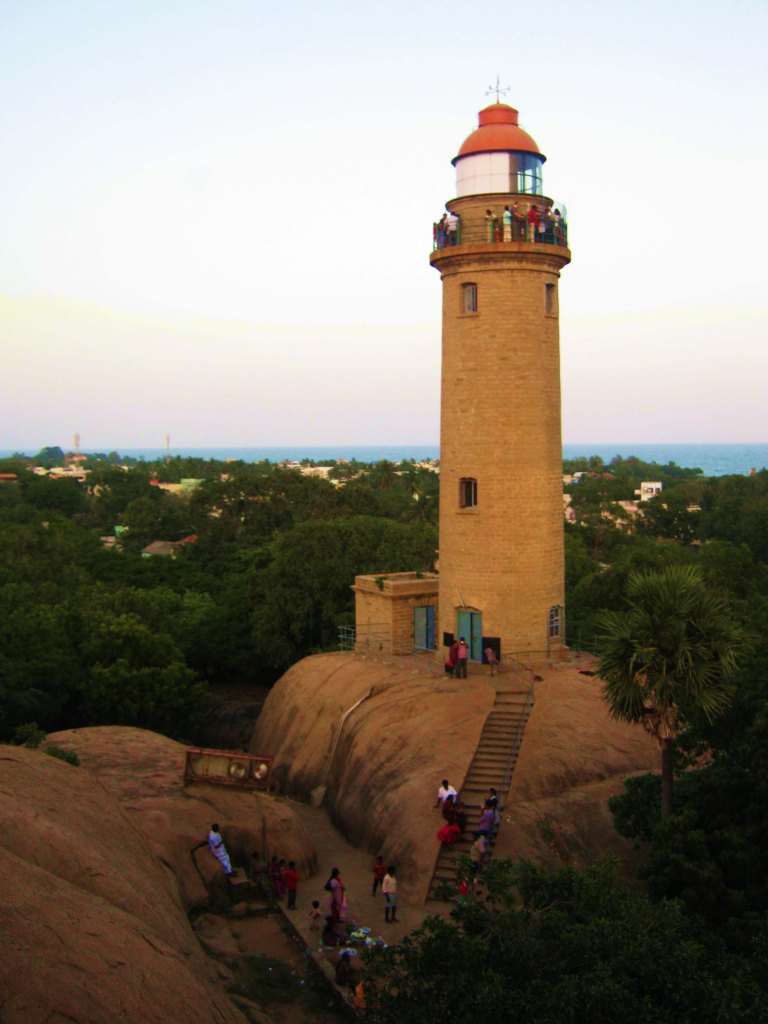 They all climbed up the spiral stairway, Timmy rather slowly, for he found the winding stairs difficult. 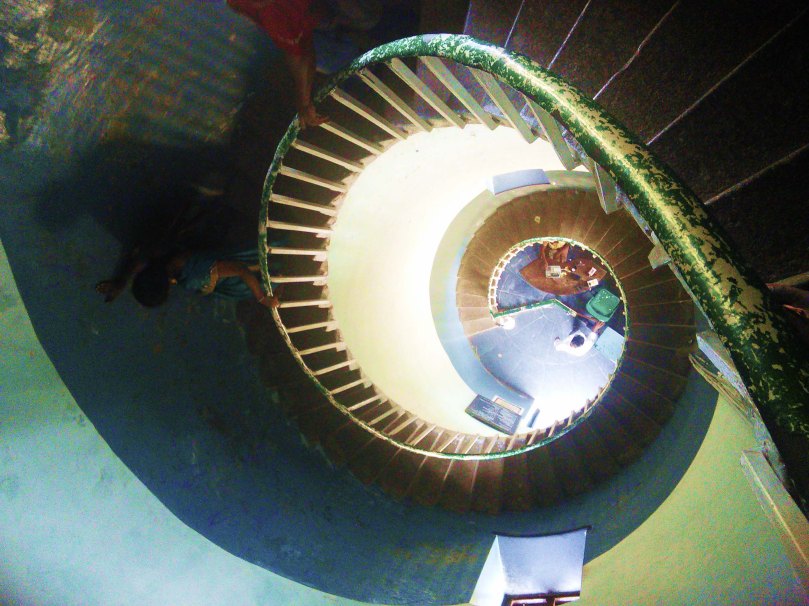 The lamp-room was a high room with big windows all round it. It was very bright, for the sun shone steadily into it. The view was magnificent! 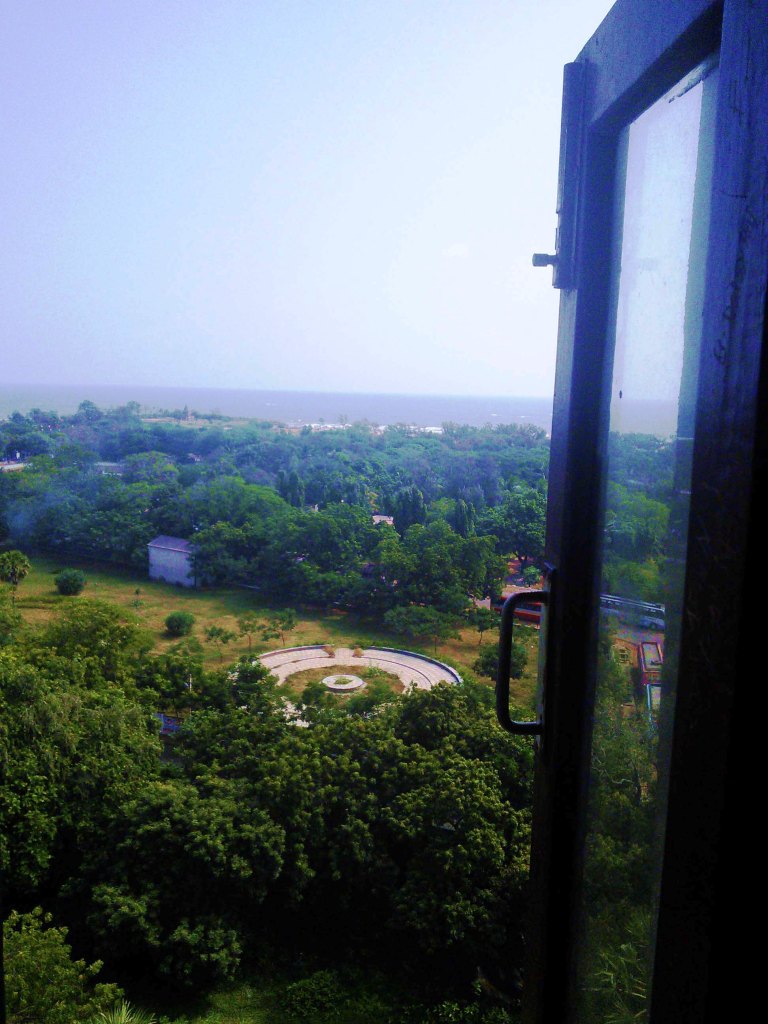 Anne gave a shout of wonder. The lighthouse was so high that the children could see for miles and miles over the heaving dark blue sea.

They went all around the lamp-room, looking in every direction.

“Look! There’s a door here!” cried Dick, “Does it open on to that little balcony, or gallery, or whatever it is that runs all around this room?”

“Yes. The gallery goes completely around the lamp-room,” said Tinker. “You should see it sometimes when the weather’s rough., and the gulls go seeking somewhere out of the storm. They perch on that gallery by the dozen! But you can’t go out there except in calm weather – you might be blown right off! You’ve no idea what it’s like when there’s a storm. Honestly, one night when my father and I were here I thought I felt the lighthouse rocking!”

“This is about the most exciting place I’ve ever stayed in,” said Anne, her eyes shining. “Tinker, I think you are the luckiest boy in the world!”

“What a pity we can’t light the great oil-lamp at the top of the lighthouse,” said George. “That must have been the lighthouse keeper’s greatest moment – lighting up the lamp to warn ships away. I wonder who first thought of a lighthouse – someone whose folk sailed, and might be wrecked on rocks, I suppose?”

“One of the first great lighthouses was built ages ago on an island called Pharos at the mouth of the Nile, not far from the great port of Alexandria,” said Julian.

“What was it built of – stone, like this one?” asked Tinker.

“No. It as built of white marble,” said Julian. “I thought of it today when we went up the spiral staircase here – because the Pharos lighthouse had one too – much, much bigger than ours.”

“I don’t know if it had a lamp,” said Julian. “It’s said that an enormous fire was built each night on the top of the lighthouse, whose flames could be seen by ships a hundred miles away!”

“Goodness – it must have been a pretty high lighthouse, then, this Pharos!” said Dick.

“Wellm it was supposed to be about 180 metres high!” said Julian.

“Whew! I wonder the wind didn’t blow it down!”

The only thing missing in the lighthouse was a room for me to set up home in.

A little further still, nestling by a sweet corner of the stream, is what is left of Medmenham Abbey.

The famous Medmenham monks, or “Hell Fire Club,” as they were commonly called, and of whom the notorious Wilkes was a member, were a fraternity whose motto was “Do as you please,” and that invitation still stands over the ruined doorway of the abbey.  Many years before this bogus abbey, with its congregation of irreverent jesters, was founded, there stood upon this same spot a monastery of a sterner kind, whose monks were of a somewhat different type to the revellers that were to follow them, five hundred years afterwards.

The Cistercian monks, whose abbey stood there in the thirteenth century, wore no clothes but rough tunics and cowls, and ate no flesh, nor fish, nor eggs.  They lay upon straw, and they rose at midnight to mass.  They spent the day in labour, reading, and prayer; and over all their lives there fell a silence as of death, for no one spoke.

A grim fraternity, passing grim lives in that sweet spot, that God had made so bright!  Strange that Nature’s voices all around them—the soft singing of the waters, the whisperings of the river grass, the music of the rushing wind—should not have taught them a truer meaning of life than this.  They listened there, through the long days, in silence, waiting for a voice from heaven; and all day long and through the solemn night it spoke to them in myriad tones, and they heard it not.