What Enid Blyton Ate celebrates food in the Blyton-verse by listing all the scrumptiousness a particular book describes.

The Secret Island is one of those books I discovered only in adulthood. I was in a reading slump a couple of weeks ago; well, it only lasted for 3 days, and I didn’t stop reading longform articles online, but that still counts as a slump for someone who otherwise always has her nose buried in a book. And I should have known a Blyton book was the best cure. I enjoyed it so much even at 24 that I’m almost disappointed 8-year-old me didn’t get to experience the book too. 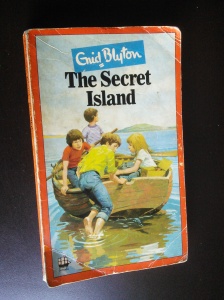 The children gazed at one another in glee. A house of wood, built by themselves – and a cave! How lucky they were to have a friend like Jack, who had a boat and a secret island.

The book features four children who run away from a bunch of unpleasant relatives and set up home on a deserted island. Which, luckily, provides plenty of exciting glimpses at food (not that Blyton ever needed an excuse).