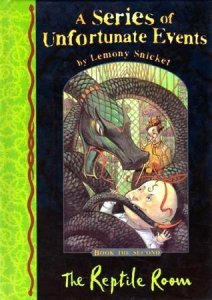 (Yes, I realise that I’m reviewing a book that came out in 1999 and is only book 2 of 13. But I have a huge backlog of books that I need to get through before I can justify buying any more. Sigh, the unlucky fate of a broke book addict.)

The series follows the three unlucky (understatement!) Baudelaire children, fourteen-year-old Violet, twelve-year-old Klaus and baby Sunny as they fall from one disastrous situation to another. So far, I’ve only read the first two books in the series (yes, I know, I need to step it up a decade but let’s look at it not so much as an outdated bookworm scenario but a more-books-to-enjoy-for-the-first-time situation). And, as the synopsis warns me, this isn’t a cheerful tale full of happy endings. In the first book, The Bad Beginning, the three children lose their parents and home in a devastating fire and are sent to live with the closest (geographically) relative that can be found. Unfortunately, Count Olaf turns out to be a murderous lunatic who will stop at nothing to get to the children’s fortune. Luckily for them, his plan is foiled just in time and they’re whisked off to their herpetologist relative Dr. Montgomery Montgomery (yes, his first name is the same as his last) in The Reptile Room. Not so luckily for them, while Uncle Monty makes for a great guardian, his days are soon to be numbered when Count Olaf makes a reappearance in their lives.

What I really enjoy about this book (as well as the last) is the clever humour and matter-of-fact philosophy that is present throughout. With all the dark hints peppered in the beginning of the book, you can see where the book is leading, but you still want to read further because Lemony Snicket is a master storyteller. He never talks down to the reader he targets even when he’s explaining what certain words mean in the context they’ve been used. He also liberally leaves clues throughout the book that any alert reader will be able to spot. While Count Olaf is a villain that unrepentantly leaves a trail of bodies in his wake, he’s more morbidly amusing than utterly terrifying.  Since the book is filled with clueless adults, it’s up to the three kids to save themselves, with their unhappy tale chronicled by a fascinating narrator.

Speaking of whom, Lemony Snicket is the pen name of author Daniel Handler. Unlike other pseudonyms, however, this one is an inventive fictional character in his own right. While he acts as biographer for the Baudelaire children, he also makes frequent allusions to his own life (I particularly liked his dedication in the beginning of the book “For Beatrice – My love for you shall live forever. You, however, did not.” Ha! How morbidly hilarious! Also, don’t look up Lemony Snicket on Wikipedia. I just did and had a major plot point spoiled).

While I think the book is wildly creative filled with a clever assortment of characters (oh and the illustrations! How could I forget the brilliant illustrations by Brett Helquist?) , I think the children it targets will enjoy it more than adults will. That shouldn’t be a problem for many adults who don’t bother with children’s books. But as someone who devours children’s fiction, there are many books that I absolutely love which aren’t meant for my age group. So for kids, it’s a great book, an absolute must-read. But for this kid in a grown up body, as much as I wanted to fall in love with the book, I think I’ll stick to being just friends.

A Series of Unfortunate Events: The Reptile Room

Price: INR 175 (for the paperback version. I bought my hardcover secondhand)

P.S. For further reading, check out this New York Times article that featured Handler AKA Lemony Snicket. Yes, it’s an article from way back in 2001 but I’m still stuck in 1999 remember?

7 thoughts on “Book Review: A Series of Unfortunate Events: The Reptile Room by Lemony Snicket”